Home Spirits USA: a bottle of whiskey worth more than a million dollars

A bottle of 1926 Scotch Whiskey could beat Saturday the record for the world’s most expensive alcohol, in excess of a million dollars, at an auction organized by Sotheby’s in New York.
The precious bottle was filled in 1986 by the Scottish house The Macallan, after the whiskey matured in oak barrels for sixty years. Unlike wine, whiskey ceases to mature and stabilizes once in the bottle. The price of the bottle that will be sold Saturday is estimated between 700,000 and 1,2 million dollars. Founded in 1924, The Macallan, whose distillery is located in Craigellachie, in the north of Scotland, produced only 40 bottles The Macallan vintage 1926 with 60 years of maturation.

Among them, 12 have a label illustrated by Peter Blake, who has produced the cover of the Beatles album “Sgt Pepper’s Lonely Hearts Club Band” (1967).
The design of the label refers to events that took place in 1926, including the assassination attempt on Italian dictator Benito Mussolini or the death of Hollywood actor Rudolph Valentino.

Three 1926 Macallan bottles have been auctioned in the last six months for more than $ 1 million each. In mid-May, in Hong Kong, a copy with the label of Peter Blake left for $ 1.01 million. The same day, a version whose label was made by the Italian artist Valerio Adami, was sold for $ 1.1 million.
In early October, another “Valerio Adami” set a new record at $ 1.12 million, during a sale in Edinburgh organized by the house Bonhams.

* Auctions are now benefiting from the rise of whiskey, now consumed worldwide and increasingly popular in Asia. The Macallan is a very dense, rich and viscous alcohol that has a great ability to ripen and add complexity to whiskey, “said Jamie Ritchie, Sotheby’s Wine and Spirits Manager. 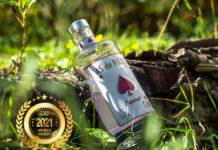